Chelsea from Rolling in dough at http://www.chelseagreigh.typepad.com/ chose Filled Breads for the 5th round of Bread Baking Day. Rolls, calzones and meat pies all count as filled breads. Son no.2 asked me, if I could bake the „Gefüllte Pizzabrot“ still in 2007. I did and the stuffed and folded pizza met the conditions for BBD #5 (http://www.chelseagreigh.typepad.com/bonvivant/2007/12/breadbakingday.html) just in time. 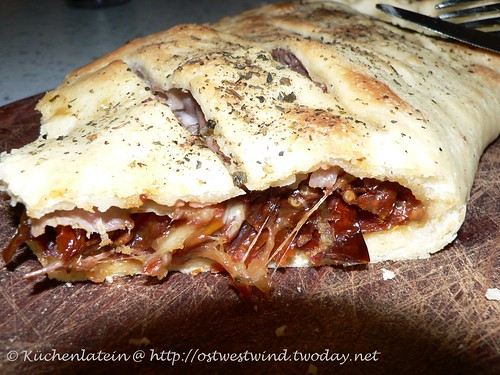 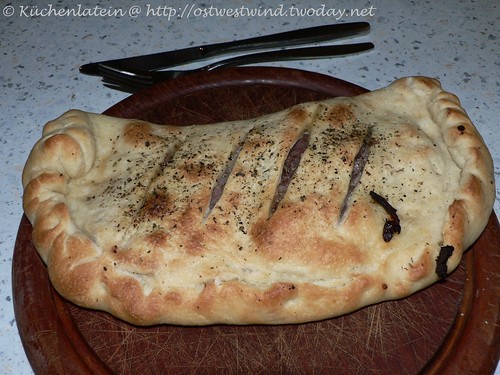 Mixer Method: Combine all of the ingredients and mix till cohesive. Knead the dough, by hand or mixer, till it’s smooth, about 5 to 10 minutes. The dough will become smooth and shiny. Place the kneaded dough in a greased plastic bag, seal, and refrigerate at least overnight, or for up to 5 days.

Preheat your oven to 225°C. Remove the dough from the refrigerator, divide it in four, and fold each piece over a few times to remove any large air pockets.

Use a rolling pin or your hands to gently stretch the dough to the thickness you like. Cover one half of the dough with tomatoes and ham. Cover with mozzarella, plucked into pieces. Season with pepper. Fold over the uncovered half and crimp shut. Place two pieces on parchment paper lined baking sheet.

Incise every piece 4 times, brush with olive oil, sprinkle with salz and rosemary.

Bake for 12 minutes until golden brown.

Note: If you plan to use the dough within 12 hours or so, knead it and then let it rise at room temperature for 1 hour before refrigerating.