<* The 13th Weekend Cookbook Challenge is hosted by Sara from I like to cook. The event runs now a year. For the first WCC the oldest cookbook should be used, for the first anniversary we should chose a dish from our newest acquisitions.

This is my newest cookbook. It’s a book written for busy mothers to persuade their children with a nice story and a terrific name for the dish to eat healthy food . My sons chose 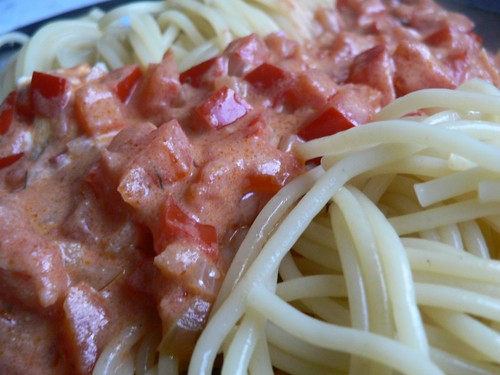 Delicious! And don’t you think Pirates‘ Goulash sounds so much better than bolognese with bell pepper and tomatoes? Red bell pepper is a good source of vitamin C. If pirates don’t get enough vitamin C, they’ll fall ill.

Peel onion and chop finely. Wash peppers, seed and cut into small
dices. Heat oil in a pan, add onions and cook until soft and transparent.
Add bell pepper and cook on low heat. After 10 minutes add the
tomatoes, season with sugar, pepper and paprika to taste. Add the
cream cheese and cook on low heat for further 5 minutes.

Mix with the spaghetti and serve.

=====
more recipes and entries in English