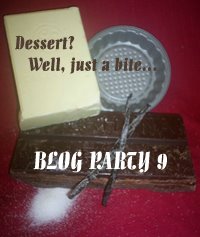 Stephanie chose Dessert? Well, Just a Bite for the 9th Blog Party. Until 8 o’clock this morning I had no idea what I could contribute to this Party. But some hours ahead the US time, Tupperware and tomorrow’s SHF gave me the chance. I baked some edible pudding moulds with my crown juwels and filled them with leftover Advoocat pudding for the SHF. Et voilà: I killed two birds with one stone. I think nothing goes better with a dessert like this than espresso. Melt butter. Beat eggs until foamy, add vanilla sugar, salt and
sugar. Fold in melted butter and flour. Fill into the mould. Bake in
the preheated oven for 10 minutes at 200 °C. Recipe for the Advoocat Pudding.