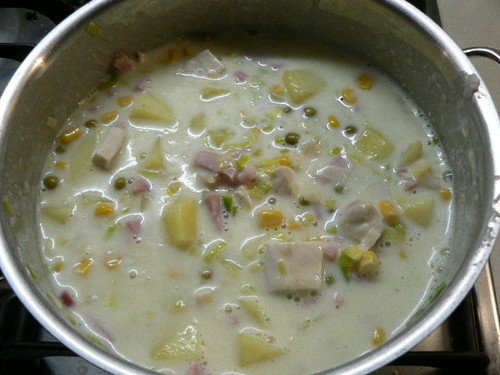 1 Heat the oil in a large pan and fry the leeks over a low heat for
3 mins until softened. Stir in the potatoes and flour, then slowly
blend in the milk, stirring with a wooden spoon. Bring to the boil
and simmer, uncovered, for 10-12 mins until the potatoes are soft. 2
Add the chicken, ham, sweetcorn and peas, then stir over a medium
heat for 5 mins or until hot and bubbling. Season to taste and serve
with crusty bread. PER SERVING 341 kcalories, protein 34g,
carbohydrate 37g, fat 7g, saturated fat 2g, fibre 5g, sugar 12g,
salt 0.66g

MAKE IT WITH FISH Replace the cooked chicken breast and ham with 300
g, 10 oz skinned smoked haddock or cod, or any firm-fleshed white
fish. Cut the fish into chunks and add at the same time as the peas
and sweetcorn. Sprinkle over a handful of chopped fresh herbs to
serve.