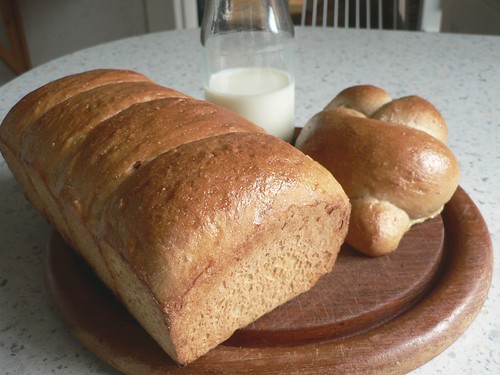 Warm the milk to the required temperature (see page 68) and dissolve the yeast in a little of it. Combine all the ingredients, then turn the dough out on to the worktop and knead for about 10 minutes. You should notice that it has a softer feel than one made with water. If it feels rather sticky on the surface, persevere with kneading and adjust the flour only towards the end. This should remain a fairly soft dough. Let it rise for up to 2 hours. Then divide the dough into 2 pieces, one weighing 500 g and the other about 150 g (you always seem to lose a little along the way). Divide the larger piece into 4, mould into rolls and place them side by side in a greased small loaf tin. To enhance the crust colour, brush the top with egg beaten with a little milk. Roll the smaller piece of dough into a sausage about 30cm long and make it into a one-strand plait or knot it as if you are tying the first part of a bow. Put it on a baking tray lined with baking parchment and brush with egg glaze, being careful not to leave a `tide mark‘ round the edges. Prove under cover as usual. The freestanding plait will probably be ready to go in the oven first, partly because, not being constrained by a tin, it will have expanded in all directions and partly because it will look more attractive if it jumps and splits just a little in the oven – if it is over-proved, the dough strands are more likely to merge into one another, reducing the definition of the shape. Start baking at 210°C and reduce the temperature to 190°C after 10 minutes. A slightly lower temperature is required because the milk sugars in the dough make it more likely to take colour as it bakes and the egg glaze accentuates this effect. If you get it right, the result will be a glossy, dark brown crust and a crumb that is soft without being pappy. The plait, being smaller and unprotected by a tin, will bake in as little as 15 minutes, the loaf in 30-40, as before.

Note: The addition of milk to a bread dough has a pronounced softening effect on the crumb. This, and the nutritional benefit of the extra calcium, is probably why it was a nursery favourite. For those striving for softness in dough, milk is a much better way to achieve it than the hidden enzymes added by the baking industry. Whole milk gives the fullest effect, but semi-skimmed will still make some difference. Putting 4 round pieces of dough together in a tin creates a slightly corrugated top, reminiscent of the fluted, tubular tins traditionally used for milk bread.