Nearly to the day Ruth from Once Upon A Feast announced the Presto Pasta Nights. Foodbloggers around the world collected together gazillions of pasta choices. Check here for the year 2007 and here for the last 8 weeks in 2008. 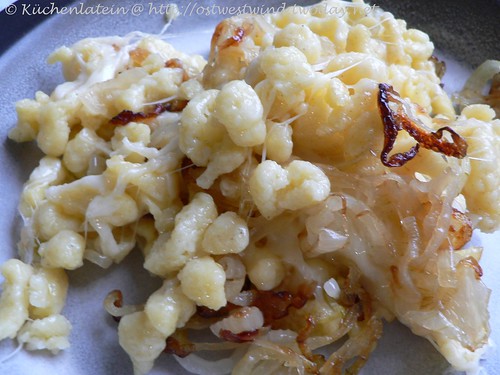 The boys said, it tasted like the Bavarian original.

No translation for Spätzle, it is a specialty from Southern Germany, made by boiling small lumps of dough made from flour and eggs. Here is a discussion how to translate the word Spätzle. The Allgäu is an area in the southwest of Swabia, belonging to Bavaria and Baden-Württemberg, two federal states of Germany. This region produces a cheese like Emmental cheese, which is called Allgäuer Emmentaler.

Making Spätzle is very difficult for a North German, a real Swabian housewife scrapes her Spätzle with a knife or a scraper like Rike. I used a fool-proof tool.

The recipe is simple, the rule of thumb says per person 100 grams Spätzle flour add one egg. Work up the ingredients with water and salt to a thick batter and shape the Spätzle into boiling water.

To make Spätzle to Käsespätzle, layer alternating Spätzle and grated cheese in a warm dish, cover the last layer with fried onions. Put on lid and let warm through for 5 minutes in a warm oven until the cheese is melted. Serve and enjoy!

7 thoughts on “One year of Presto Pasta Nights: Allgäuer Käsespätzle”