Sunitas World over at http://sunitabhuyan.blogspot.com kindly hosts the “Think Spice… Event“**. For the December edition she features cinnamon. For me the „real“ cinnamon is the bark of the Ceylon cinnamon, which rolls together from both sides. Last year we had a big discussion about the coumarin content in cinnamon in Germany. Cinnamon Stars are a must for the Advent Season in our family. Until this year I had no luck to bake them myself, but Chili und Ciabatta tried a fool-proof recipe from the K.u.K. Hofzuckerbäckerei Demel in Vienna years ago. This year the Crockyblog and Brot und Rosen had great success with the recipe that I decided to try my luck with homemade 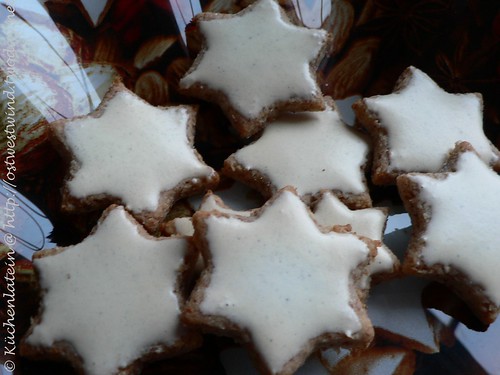 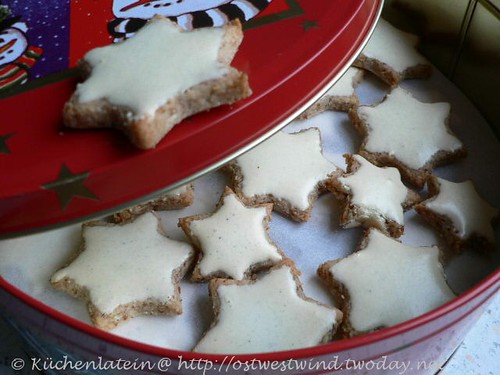 Stir together almonds, icing sugar, honey and cinnamon. Add the egg white (unbeaten) and mix together with the flat beater of your stand mixer. Then continue kneading with your hands. Roll out the pastry in portions between cling film or on icing sugar about 1 cm thick. Cut out stars and put on baking sheets lined with parchment paper.

For the icing stir together the (unbeaten) egg white and the icing sugar with the flat beater of your stand mixer on high speed until it looks white and has a sirupy consistency. The mass should be very thick and should not be too runny, it must stay easily on the stars. To line the edges use a tooth pick.

Bake at 150°C for 10-15 minutes in the preheated oven. The cookies are still somewhat soft after baking. Cool on a wire rack.