Sara from I like to cook chose Red and White for the 18th editon of Weekend Cookbook Challenge. The right idea to combine red currants and beaten egg whites.

In German red currants are called rote Johannisbeeren, but in Austrian German they are called Ribisel. So here is my contribution for this round of Weekend Cookbook Challenge 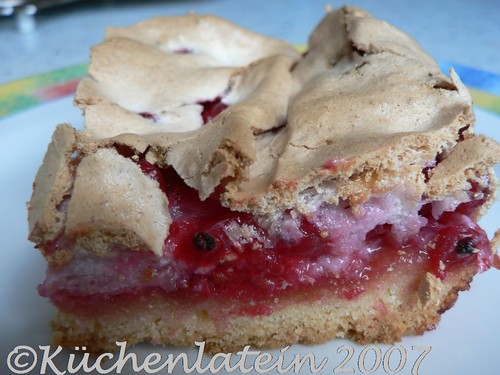 A great combination! The whole family liked it. 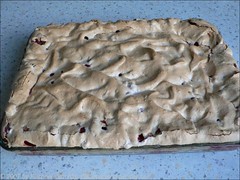 Sift the flour with the salt. Rub the butter into the flour until a breadcrumb texture is achieved. Beat the egg and work gently into the crumbs to form a smooth dough. Wrap in cling film and allow to relax in the fridge for 20-30 minutes before using.

Roll out on a greased and flour tray and poke with a fork or pastry docker. Bake an 180 °C until pale yellow (about 20 minutes).

In the bowl of an electric mixer fitted with the whisk attachment, whip the egg whites until foamy, about 1 minute. Continue to whip on medium-high speed until soft peaks form, two to three minutes. Slowly add 50 grams sugar and whip until stiff peaks are formed, one to two minutes more. Combine red currants with the reamaining sugar and fold with the almonds into the beaten eggwhites. Spread onto the pastry dough and bake for further 20to 30 minutes until the eggwhites are light brown.