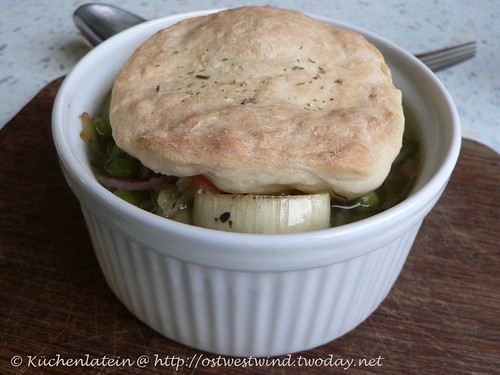 2. Meanwhile, tip the flour into a bowl, make a well in the centre, then add the yogurt, remaining oil, thyme leaves and a little salt. Using a cutlery knife, mix to bring together to a soft dough. Divide into 4 and shape into rounds on a floured surface.

3. Stir the peas, ham and grated apple into the leeks, then divide between 4 individual pie dishes or one large dish. Top each with a round of dough, scatter with more thyme, then bake for 20 mins until golden.

Look for the mixed ends of ham on your supermarket’s deli counter. Cheaper than buying freshly cut, they’re a great buy when you don’t need large slices and just want to shred the ham for cooking.