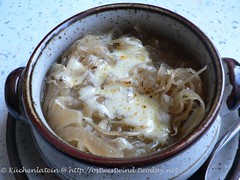 Combine the onions and butter in the slow cooker. Cover and cook on high for 1 hour, then decrease the heat to low. Cover and cook, stirring occasionally, for about 4 hours, until the onions are evenly browned. Sprinkle in the flour and stir well. Add the wine and stock and cook on low for 2 hours, allowing the flavors to meld. Stir in the port and season to taste with salt and pepper. Ladle into bowls, sprinkle with the parsley, and serve at once.

Author’s note: Although Walla Walla, Washington, is home to more than sixty wineries, it is also famous for the Walla Walla onion-a big sweetie similar to a Vidalia or a Maui onion. Legend has it that a French soldier found the seeds of a large, sweet onion on the island of Corsica and brought it to Walla Walla. The onion owes its yummy flavor to a high water and low sulfur content, and makes the sweetest of onion soups. For an extra treat, top the soup with a crouton of French bread covered with melted Gruyere cheese.

SUGGESTED BEVERAGE: A Washington state microbrew or a medium- to full-bodied red wine from the Walla Walla Valley.

another recipe from the book

2 thoughts on “Soup of the week: Onion Soup from the Crockpot”