From next month Barbara from Tigers & Strawberries gives herself a three-month “maternity leave”. But for this month TSIR-Theme Back to school Barbara is still doing the round-up. From next month on the event is hosted bei Danielle, from Habeas Brulee.

Barbara wishes, that every participant should pick a spice that he/she has either never used, or knows very little about, and learn about it. I have never used „Smoked Paprika„. 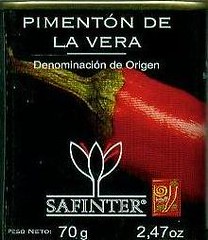 In most languages, paprika denotes the dried spice only, but in German it is commonly also used for the vegetable bell pepper. Paprika is a fine powder ground from certain varieties of Capsicum annuum which vary in size and shape. They may be small and round (Spain and Morocco) or pointed and cone shaped (Hungary and California). They are larger and milder than chilli peppers. Paprika is produced from peppers ripened to redness, sometimes called ‘pimento’, the same as used to stuff olives. The powder can vary in colour from bright red to rusty brown.

The colour of Smoked Paprika is a striking deep red that spreads through any dish to which it is added. It has an intoxicating smoky aroma from the slow oak smoking, and a silky texture from the repeated grinding between stones. And because three different peppers are grown and smoked, there are three different delicious flavours – sweet, bittersweet and hot. The smoked paprika from La Vera was the world’s first pepper spice to be given a Denominación de Origen status in 1993. 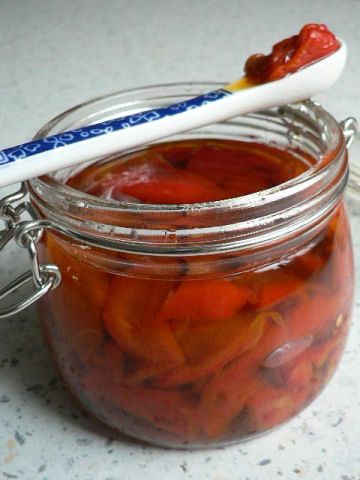 I prepared only 1/3 of the following recipe and used only red bell peppers. Very delicous on pizza!

Great on their own, or thrown into pasta or on top of pizza.

1. Pour the oil into a medium saucepan. Add the paprika and garlic,
heat very gently for 5 mins, then leave to cool. Lay a piece of
muslin over a sieve and strain, discarding the garlic and paprika to
leave bright orange, scented oil. In another pan, dry-fry the spices
for 1 min to release their aromas. Add to the paprika oil and set
aside.

2. Heat the grill to high. Cut the peppers in half (leave the stalks
in place – they’ll easily pull out later), and spread over 2 large
baking sheets, skin side up. Grill for about 15 mins, until the
skins blackened. Transfer the still-hot peppers to plastic food bags,
seal and leave to cool. Once the peppers are cool enough to handle,
slip off the skins, pull out the stalks, scrape away the seed and
tear into large pieces.

3. Bring the vinegar and 300 m1 water to a simer in a large pan and
tip in the peppers. Bring back a simmer for 3 mins, then drain well
and pack jars or heatproof containers. Gently reheat the spiced oil
for a few mins, then pour over the peppers and seal.

Add the parsley before you serve the peppers (or add now if you’re
planning to use them same day) as the parsley will discolour. Keep
in the fridge for up to 1 week.

One thought on “The Spice is right VI: Back to School: Smoked paprika”