This week Scott ** from Real Epicurean (www.realepicurean.com now defunct) is hosting the Weekend Herb Blogging. The WHB game at the end of the weekly round-up from Coffeepot at Coffee and Cornbread gave me a hint what to cook this week. I asked how often a cook uses Allium cepa resp. onions in the kitchen. I use a lot of members from the Alliaceae-family like onions, garlic, chives and at least leeks. Leek is used as a winter vegetable and together with celeriac and carrots you get greens to season a soup. Leeks contain vitamin C, vitamin K , folic acid as well as trace elements potassium, calcium, magnesium, iron and manganese.With this healthy vegetable I prepared a low carb dish. 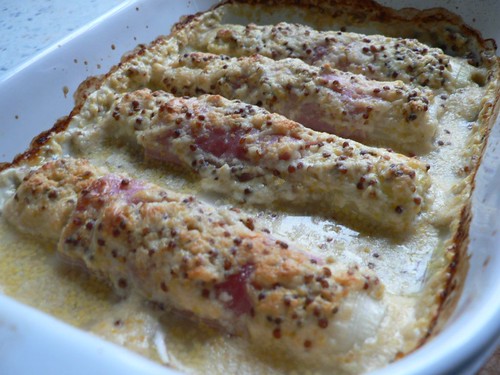 1. Heat oven to 200 °C/fan 180 °C/gas 6. Cook the leeks in a pan of
boiling salted water for 4-5 mins or until just tender. Drain and
cool under a cold tap to stop them from cooking any further, then
drain again well and pat dry on kitchen paper.

2. Wrap each leek in a slice of ham, then arrange, side-by-side, in
a large baking dish. Mix the cheddar in a bowl with the Dijon
mustard and crème fraîche, until well combined. Season to taste.
Spread over the leeks, then bake for 15-20 mins until bubbling and
golden brown. Serve at once with plenty of crusty bread to mop up
the juices.

Make it with potatoes:

Bake four jacket potatoes in the oven for 40 mins before cooking the
leek dish. Split oven and serve the leeks on top.

Make it tangy: Use 100 g, 4 oz, crumbled blue cheese,such as Cashel
blue, or try some gorgonzola instead of cheddar. Omit the mustard.