In August the Mellow Bakers bake 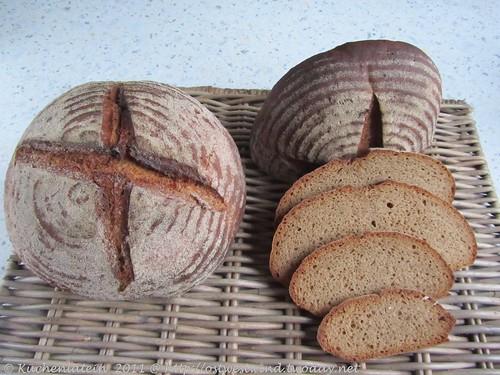 It’s not really black, but dark brown. I used a country coffee, a coffee substitute from barley, rye and root chicory. I did not use rebaked old bread for the soaker. In Germany Schwarzbrot gets its colour from a long baking, not from molasses or coffee. Hamelman’s version was tasty.

2. OLD-BREAD SOAKER: Put the rebaked old bread (Ulrike: just old bread) in a dough bucket or large bowl. Pour the hot water over it. Add the ground coffee and oil and stir thoroughly with a spoon until the coffee is dissolved and the bread is completely moistened. Cover with a lid or plastic. It is most efficient to make the bread soaker at the same time that the sourdough is prepared, and to then let it stand at room temperature until mixing time.

3. MIXING: Add all the ingredients to the mixing bowl. Note that all the dough water is used in the sourdough and the soaker, and no additional water is added. Some of the soaker water may need to be warmed or cooled when computing the desired dough temperature. In a spiral mixer, mix for 3 minutes on first speed, then about 3 minutes on second. The 40 percent white flour will give the dough a perceptible, but not overly strong, gluten development. Desired dough temperature: 80°F/26,6 °C

5. DIVIDING AND SHAPING Divide the dough into 1.5- or 2-pound pieces; shape round or oblong.

VARIATION: Charnushka seeds (also known as nigella or black caraway) can be added to the tops of the loaves. They provide a taste that goes nicely with the strength of the bread’s flavor. To apply once the bread has been shaped, moisten the surface and sprinkle the seeds over the top, or press the surface into a damp cloth and then into a tray of the seeds.

Hamelman’s Notes: There are two ways in which old bread is incorporated into a fresh batch of dough: It can be soaked, with the crust, until thoroughly moistened and then added, or it can be sliced and baked again before the soaking. In this formula, the old bread is sliced, then returned to the oven on sheet pans and baked until it is a deep, dark brown, but take care not to blacken it as it will taste bitter. It adds a potent toasty flavor when soaked and incorporated into the new dough. The ground coffee also adds its own bite to the bread. The result is a bread that is quite black, without any hint of the sweetness that molasses often brings to dark breads. Ulrike: without rebaking.