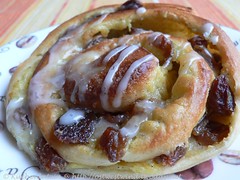 There are now more than 80 members who bake Tueday’s with Dorie.

This week Peabody of Culinary Concoctions by Peabody has chosen Brioche Raisin Snails . This brioche recipe is different from mine I tried Monday last week.
I followed the recipe with some modifications: 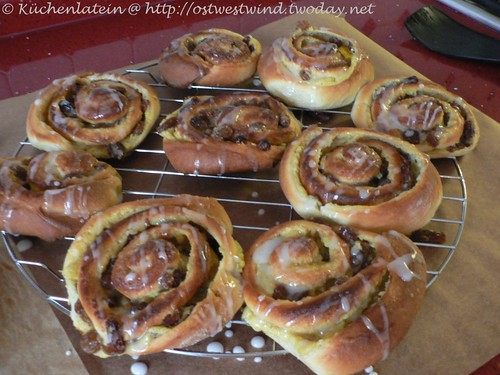 Getting Ready: Line one large or two smaller baking sheets with parchment or silicone mats. Put the raisins in a small saucepan, cover them with hot water and let them steep for about 4 minutes, until they are plumped. Drain the raisins, return them to the saucepan and, stirring constantly, warm them over low heat. When the raisins are very hot, pull the pan from the heat and pour over the rum. Standing back, ignite the rum. Stair until the flames go out, then cover and set aside. (The raisins and rum an be kept in a covered jar for up to 1 day.) Mix the sugar and cinnamon together. On a flour dusted surface, roll the dough into a rectangle about 12 inches wide and 16 inches long, with a short end toward you. Spread the pastry cream across the dough, leaving 1-inch strip bare on the side farthest from you. Scatter the raisins over the pastry cream and sprinkle the raisins and cream with the cinnamon sugar. Starting wit the side nearest you, roll the dough into a cylinder, keeping the roll as tight as you can. (At this point, you can wrap the dough airtight and freeze it up to 2 months; see Storing for further instructions. Or, if you do not want to make the full recipe, use as much of the dough as you’d like and freeze the remainder.) With a chef’s knife, using a gentle sawing motion, trim just a tiny bit from the ends if they’re ragged or not well filled, then cut the log into rounds a scant 1 inch thick. Put the snails on the lined baking sheet(s), leaving some puff space between them. Lightly cover the snails with wax paper and set the baking sheet(s) in a warm place until the snails have doubles in volume–they’ll be puffy and softabout 1 hour and 30 minutes.

Getting Ready To Bake: When the snails have almost fully risen, preheat the oven: depending on the number of baking sheets you have, either center a rack in the oven or position the racks to divide the oven into thirds and preheat the oven to 375 degrees F. Remove the wax paper, and bake the snails for about 25 minutes (rotate the sheets if you’re using two, from top to bottom and front to back after 15 minutes), or until they are puffed and richly browned. Using a metal spatula, transfer the snails onto a cooling rack.

If You Want To Glaze The Snails: Put a piece of wax paper under the rack of warm rolls to act as a drip catcher. Put the confectioners‘ sugar into a small bowl, and stir in a teaspoon of water. Keep adding water drop by drop until you have an icing that falls from the tip of a spoon. Add the vanilla extract, then drizzle the icing over the hot snails.

I liked the result and will definitively will bake the snails again. Thanks Peabody for chosing this recipe. But I was a little disappointed by the taste of the flambéed rum raisins. There was not a hint of rum flavour left after baking. Next time I’ll soak the raisins over night in rum to save the rum flavour after baking.

Enjoy more Brioche Raisin Snails by visiting the blogroll at the Tuesday’s With Dorie website.