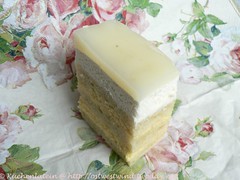 Véronique baked it in a dark version, if not, she buys one in a Dalloyou shop 22.02.2021 ** in Paris. Although she lives in Paris, she doesn’t care for this cake. Lis, Fran, Shea und Ivonne chose this elegant and polished French dessert for this month’s Daring Baker’s Challenge. There are many stories about the origins of this cake, known as both Clichy cake and Opéra cake. Many believe that Louis Clichy was its creator because he premiered the gâteau, with his name written across the top, at the 1903 Exposition Culinaire in Paris. It became the signature cake of Clichy’s shop on the Boulevard Beaumarchais. Dalloyau, another pastry shop,sold a very similar dessert, known as L’Opéra (in honor of the Paris Opera), and some claim that theirs was the original. By all means an Opera Cake is ar ectangular formed layered cake. It is composed of an jaconde, an almond sponge cake named for the Mona Lisa (La Joconda in French), a syrup to wet the joconde, a buttercream, a ganache or mousse and a glaze to cover the final layer. 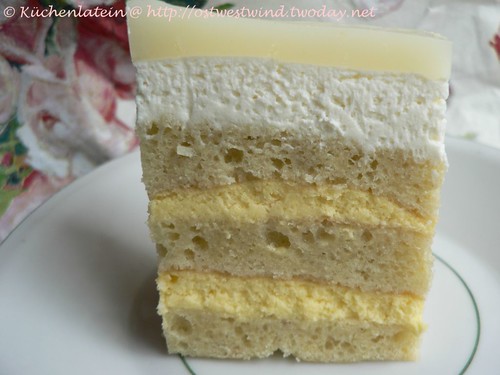 The recipe we should do this month sounded very rich to me, so I halved the recipe, used half fat butter for the buttercream – yes it worked! – and instead of the white chocolate glaze I made a glaze from lemon juice, limonchello, sugar and water, thickened with agar agar.

The lemony taste was just right, but the cake was still very rich and didn’t convince our family. The history behind this cake was interesting and until this month I didn’t know that there is another meaning behind La Jaconde.