Two years ago, we spent our holidays in Cymru/Wales. Wales has two national emblems: the daffodil, also called St. Peter’s leek and leek. According to legend, Saint David, the patron saint of Wales, ordered his Welsh soldiers to identify themselves by wearing the vegetable on their helmets in an ancient battle against the Saxons that took place in a leek field. Michelle from Greedy Gourmet asks how we like our leek to celebrate St. David’s Day.

Leek is a versatile low budget vegetable, available the whole year. For the 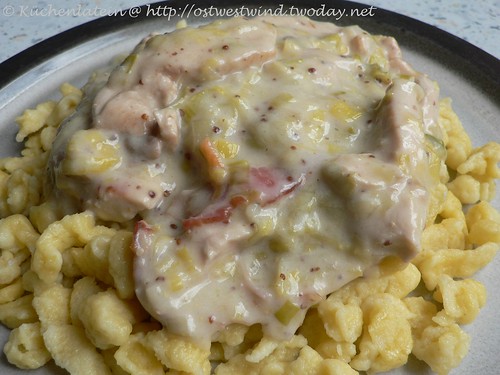 I used 4 thick „winter leeks°, they weighed about 1! kilogramme. I served the leek on homemade Spätzle. The picture is not as good as the taste!

1. Heat the oil in a large saucepan and fry the bacon for 2 mins. Add the chicken, then cook with the bacon for a further 2-3 mins, until the pieces begin to turn golden. Tip in the leeks and cook gently for 10 mins until wilted and tender.

2. Stir through the flour and gradually add the stock, stirring constantly. Add the wholegrain mustard and crème fraîche, stir again, then simmer gently for 5 mins until the sauce is slightly thickened and creamy. Serve with on top of baked jacket potatoes.

:Tip: You can also serve this stirred through spaghetti or tagliatelle