This year Antonia from Food, Glorious Food hosts the food blog event for the British Food Fortnight. I participated last year with a pudding, a dish intrinsically tied to British food for me. This year I have two British dishes 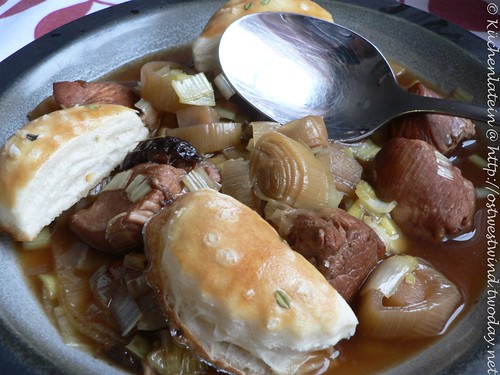 Cock-a-leekie soup is a delicious soup from Scotland often served as a starter at Scottish events such as Burns Night, St Andrews Night and as a Hogmanay treat. Cock a Leekie soup dates back to the 16th century when a fowl would be boiled with vegetables such as leeks to provide a filling broth and this is why Cock a Leekie soup is so named. There are different opinions about the prunes: A traditional Scottish Cock a Leekie soup recipe includes prunes though some cooks will leave the prunes out of their recipe because they are not to everyone’s taste. Other chefs will include the prunes in the cooking of Cock a Leekie soup but will remove them before serving the soup.

I served a slow-cooker version of this soup with prunes for a German leek-event, but it also represents British Food. The recipe can be found here (click).

But I don’t want to serve a reheated dish, I freshly baked 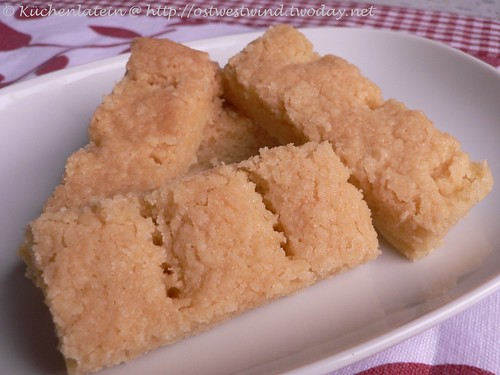 Shortbread is generally associated with and originated in Scotland, but due to its popularity it is also made in the remainder of the United Kingdom. There are three kinds of shape for shortbreads, we prefer the „fingers“. This time the shortbread is „shorter“ than my Petticoat Tails, but I still have to work on the surface.

1. For the shortbread, lightly grease a baking tray or roasting tin 30 x 23 x 4 cm, and cut a rectangle of foil to fit the base. Lightly grease the foil, and preheat the oven to 160?C/gas 2.

2. Combine the flour, caster sugar, butter, semolina, and lemon rind in a food processor and blend until the mixture comes together as a dough.

3. Press the shortbread into the prepared tin and level with the back of a spatula. Sprinkle the top with the demerara sugar.

4. Bake for about 30-40 minutes, until the shortbread is a pale golden. Leave to cool in the tin for a few minutes before cutting into about 26-28 fingers.

5. Carefully lift the shortbread fingers out of the tin with a small palette knife and leave to cool on a wire rack.