Helen (Hippolyra at www.fussfreeflavours.blogspot.com) from Fuss Free Flavours hosting her first food blog event for British Food fortnight . My blog’s regular readers know that my favourite chef is Gary Rhodes, I am a subscriber of Good Food Magazine and not unfamilar with British food. For me the epitome of British Food is „Scones with Clotted Cream and Jam“. I’ve blogged about it in German. The clotted cream I substituted with kaymak , which is produced in a small dairy in the midst of Schleswig-Holstein. And I connect British food to puddings. My pudding basins – bought in Britain – haven’t been in use for a long time. So I decide to participate this event with 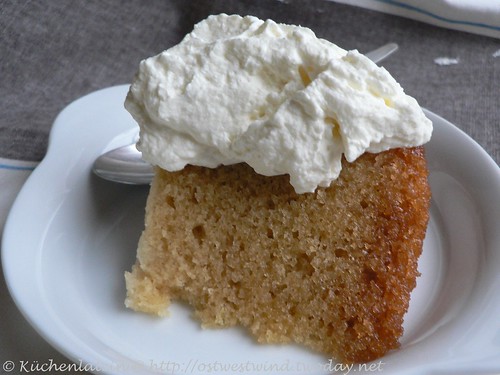 My family was so greedy, I couldn’t take a picture with cream and syrup. My 3 gentlemen said, I should use my pudding basins more often. 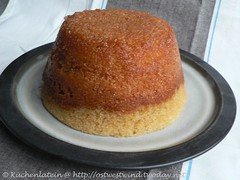 2. Once cooled, remove from fridge and add the golden syrup to the base of the basin.

4. Spoon the flour mixture into the basin, over the golden syrup.

5. Take a large piece of tin foil, fold it in half and grease one side thoroughly.

6. Cover the pudding with the greased tin foil, pleating the foil a few times to allow room for the pudding’s expansion.

7. Fasten the foil to the rim of the pudding basin with string.

8. Place the covered pudding basin in a large steamer.

9. Steam over a medium heat for 1 hour 30 minutes. Make sure that the steamer does not boil dry, topping up with boiling water as needed.

10. Once the pudding is risen and cooked, turn it out from the pudding basin. Serve with golden syrup and clotted cream or custard.

My other entries I connect to British food: