The 120th edition of Weekend Herb Blogging is hosted by Erin from The Skinny Gourmet.
In my kitchen cabinet I found some Mung beans. The Mung bean, also called green soy is one of the important Asian pulses/legumes. I like the story about the Chinese rice growers, who sailed upwards the Yangtze Kiang. They carried a lot of victuals and soy beans for sowing. After weeks of stressfull journey they got into a thunder-storm, they struggled hard not to sink. The victuals where gone and they were in great need. The ship was struck, the powerless crew was prepared to meet the death. Suddenly seed bags began to burst and soon they found green, crunchy bean sprouts, which the farmers gorged at once. I sprouted my beans on the window sill. 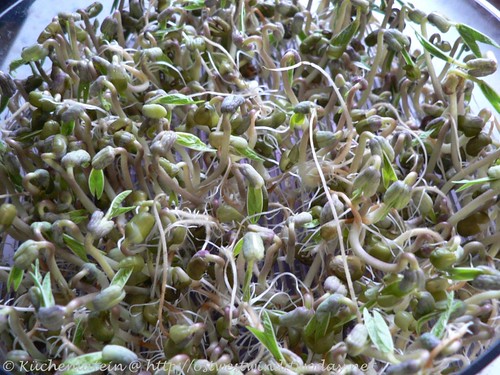 I got enough sprouts to bake the 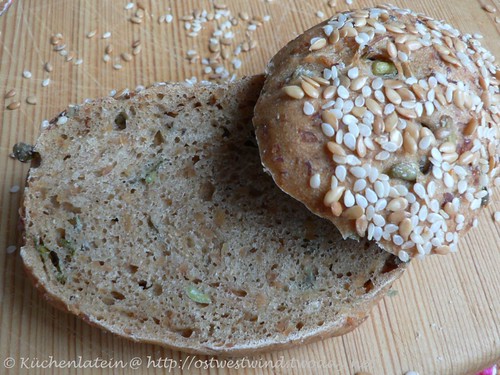 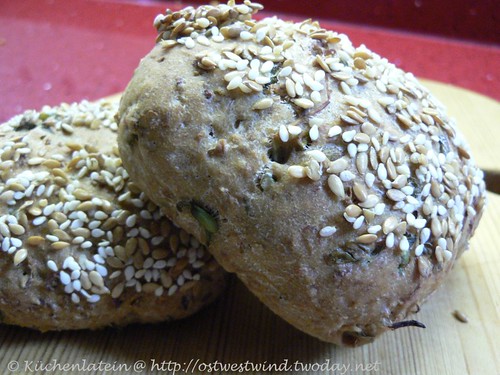 For the soaker mix the ingredients and let stand at room temperature for about 3 hours.

For the final dough liquefy the yeast in water and mix with flours, soaker, barley malt and garlic. Begin to kneat and add salt after 2 minutes kneading. Add oil and soy sauce in portions. At the end of kneading add the bean sprouts. Cover dough with a damp towel and let rest for about 20 minutes. Divide into ten pieces, each weighing about 100 g. Shape each into a log, press it flat. Press into a wet towel to moisten the surface, then dunk into a bowl of linseeds and sesame seeds.