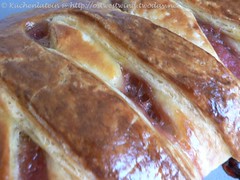 I am very happy that Kelly on Sass & Veracity and Ben on What’s Cookin’? didn’t chose another rich buttercream filled cake. They went for Danish Pastry and a Danish Braid. You could use any filling as long it is made from scratch. I live only 100 km from the border to Danmark, where this kind of pastry is called Wienerbrød, in Germany it’s called Plunderteig. In Northern Germany we have pastries called Kopenhagener – after the capital of Danmark, in Danmark they are called Spandauer – a district of Berlin.

I always wanted to make Danish Pastry or puff pastry. It was surprisingly easy to make the pastry, it was only time consuming. I made two braids, one filled with a pastry cream from Dorie Greenspan, the other I filled with a rhubarb compote by guess and by gosh.

They way how to fill the pastry

I’ll definitely make Danish pastry again, but our family would prefer the dough without any flavours.

For the entire recipe visit Kelly on Sass & Veracity and Ben on What’s Cookin’?** or another Daring Baker member.