This week GFGF-group cook with any vegetable we still get fresh. Last month I chose parsnips and a few days later I came across the selection of recipes inspired by the Gamache series. The parsnip and apple soup is served twice in the Nature of the Beast. First Reine-Marie eat it in a conversation with her husband in the bistro, then she prepared it herself.

Dinner was served, starting with parsnip and apple soup, with a drizzle of walnut infused oil on top.
„Olivier gave me the recipe,” said Reine-Marie, turning down the light in the kitchen.
[…]
Gamache took a couple of spoonfuls of soup. It was smooth and earthy and just a touch sweet.
„Delicious,” he said to Reine-Marie, but his mind was elsewhere.

All ingredients for the

Parsnip and Apple Soup with a Drizzle of walnut-infused Oil 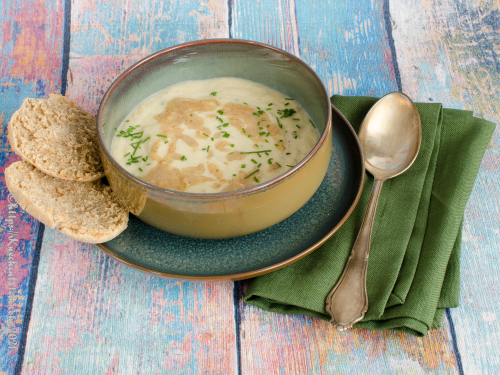 were fresh available. It is a very delicious soup. I served it as a main dish with English muffins

4 thoughts on “Parsnip and Apple Soup”