For he GFGF group we are chosing a new recipe for the Thanksgiving table. That was easy. Because Thanksgiving is not celebrated in Germany, I could select anything new. I chose dried beans as vegetable and served 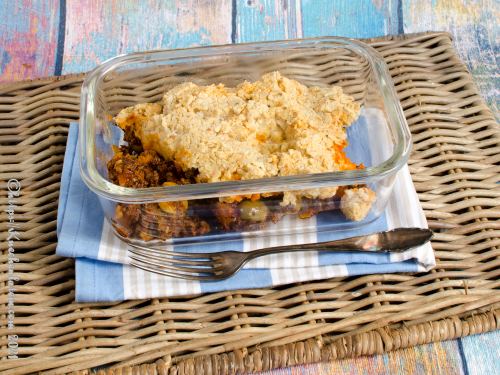 And for dessert a licorice pipe.

As the Lemon Meringue Pie is threaded through all the books from Louise Penny’s Gamache, the Shepherd’s Pie is served at least six times, proven prepared by Gabri, Myrna and Clara.

When Gamache arrived back at the B&B, he found Olivier and Gabri getting ready to head over to he Morrows for a potluck dinner.

„There’s a shepherd’s pie in the oven for you, if you want“, Gabri called as they left.

Myrna brought it along in The Cruelest Month * and A Great Reckoning * and it is Clara’s comfort food in The Nature of the Beast * after Peter had gone. Gabri served it in Glass Houses *

Gabri returned to his kitchen and poured himself a bulbous glass of red wine. And sat on a stool by the counter, looking out the back window into the darkness.
Getting up to prepare the shepherd’s pie, comfort food for their dinner, Gabri suspected his guests would find very little peace in whatever Gamache discovered. And probably no comfort in the food.

„How did the meeting go, yesterday?“ asked Gamache as he and Jean-Guy settled into the study. They’d had their dinner. Shepherd’s pie and chocolate cake. Honoré was asleep in his room.
The Gamaches‘ unexpected guest, the young man with the weird hair, Benedict, had gone of for the bistro for a few drinks. He’d spent much of the time, after being introduced to Annie and Jean-Guy, playing with Honoré. Once Honoré was put to bed for the night and they’d had dinner.

So why not serving it on my not Thanksgiving Table.